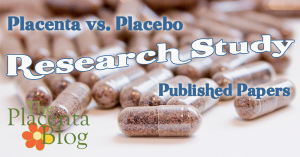 The papers from the Placenta versus Placebo double-blind controlled research study out of UNLV have been published.

This study began collecting data in December of 2013, and that phase lasted through March of 2015. During that time, we actively recruited women to participate in the research study, and ended up with 27 women in the final data set. This is a very small sample size, but a power analysis was done, which established that a threshold of 28 would be sufficient for critical analysis of the results. With 27 final participants, it was determined that while small, it was very close to the goal of 28 and useful for this pilot investigation.

As the Founder and Director of Placenta Benefits LTD, my participation in the research study was strictly limited to the preparation of the participant’s placentas, and I had no access to the data, the statistical analyses, or the final research papers. I received the final results this week, when the papers went to press. We did this to eliminate any potential conflict of interest, and to ensure the integrity of the research itself. All of the placentas in this research study were prepared according to the PBi method, which I developed based off of Traditional Chinese Medicine techniques back in 2005.

Let’s take a look at each of these papers in turn.

What the Research Shows

Essentially, this research study shows that the field continues to be wide open to further study, and leads us to many interesting discoveries and more questions. Hopefully those questions will continue to be researched over the coming years.

The first paper, the hormone analysis, concludes “no significant differences” were found between the placenta group (12 participants) and the placebo group (15 participants), in the hormone levels when each group was compared. This is not surprising, due to the huge variations among women’s hormone levels in general. However, when the statistician looked at the volume of distribution, which looked at the concentration of hormones in the capsule they were taking (placenta or placebo), and compared it to what shows up in their body after taking the capsule, there was a difference between the two groups.

There was a relationship between the amount of hormones in the capsule and what ended up in her system, for women taking the placenta capsule. In other words, the placenta capsules had more hormonal content, and the women in the placenta group had more hormones in their system than did the women in the placebo group. Even though we didn’t see a significant difference between groups (all women combined together), it does show that the hormones from the capsules are getting into the women’s system (on an individual level). So they ARE affecting the women’s hormone levels.

Limitations of the Study

Another major limitation in the study design was that the timing of when the dose was taken was neither recorded, nor controlled. Suggestions were given for how to take the capsules, but not WHEN to take the capsules. Some of the participants could have taken a dose of placenta capsules the night before their hormone levels were measured, and some women could have taken them 30 minutes prior. The hormone profile between a woman who took placenta capsules the night before, versus a woman who had taken a dose 30 minutes before, will be vastly different.

Women report feeling the affects of the placenta capsules within 30-60 minutes of taking a dose, which is about the time one would expect based on hormone distribution and absorption. However, hormones leave the bloodstream fairly rapidly as well, within a few hours. So, if it had been more than 4 hours since taking a dose, those effects, if any, would have dissipated and would no longer be measurable (or as strong).

Interesting Findings
The study’s finding that encapsulated placenta was sufficient to modestly affect the hormone concentrations is particularly interesting, given another recent study that showed success in treating severe postpartum depression with the steroid hormone allopregnanolone. Progesterone was present in placenta capsules, and progesterone is known to partially convert to allopregnanolone when taken orally. Since progesterone is present in the placenta capsules in a significant enough amount to potentially affect postnatal hormone levels, it is a good starting point for future research.

What the Research Shows

This paper concludes there were no significant differences between groups. With an analysis like this, each person’s individual data is collected, then lumped together and the averages between groups are reviewed. However, when this is done, all the variations are mixed together, too. This dampens potential differences that may be there.

Limitations of the Study

Data was collected from the participants four times, in four different meetings.

Meeting 2: Immediate Postpartum – within 4 days of giving birth. This meeting collected the samples before any supplementation.

Meeting 3: Post-Supplementation – between 5 and 7 days of birth. This meeting was the first one after starting supplementation.

There was also a difference in fatigue between the placenta and placebo groups in the data from the fourth meeting (this was the second meeting after supplementation, and the final meeting of the study). Women taking the placenta capsules had lower fatigue scores (i.e., more energy) than women taking the placebo. When the researchers controlled for the quality of reported sleep, and the number of hours slept, the difference remained, meaning the difference was not related to the number of hours or quality of sleep.

This research study was the first of its kind. Academic research builds upon each study that has gone before, and no randomized, placebo controlled study evaluating these variables had ever been done prior to this one. We had to start somewhere, and this was a very good first step.

This study does not close the door on research into the effects of placentophagy. There is nothing in this research that says placenta does not work, or is not useful to postpartum women.

There were also no negative effects reported in this study by women taking placenta capsules, suggesting that placenta, when prepared according to the PBi method of encapsulation at least, is not dangerous to women. Other methods have not been studied at all.

Additionally, it did show differences during the post-supplementation measurements – the third meeting, while the participants were taking the highest dose of the capsules, and the final meeting. The placenta group did demonstrate less fatigue (higher energy), and less depression than the placebo group.

That is incredibly promising for this field of research, and does relate to what women have reported anecdotally over the years.