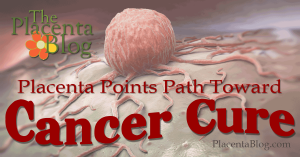 Scientists were hoping to create a vaccine against malaria that they could give to pregnant women. What they may have found instead is a weapon against cancer.

In the lab, they were able to create the same protein which the malaria parasite uses to adhere to the placenta, and then added a toxin. The lethal combination of the altered protein seeks out the cancer cells, gets absorbed by the cancer cell, the toxin is released inside the cancer cell like a tiny hidden bomb, and the cancer cell dies. They have successfully tested this in cell cultures and in mice, and are hoping to start human trials within four years. Their discovery was recently published in the renowned scientific journal Cancer Cell.

“For decades, scientists have been searching for similarities between the growth of a placenta and a tumor. The placenta is an organ, which within a few months grows from only few cells into an organ weighing approximately two pounds, and it provides the embryo with oxygen and nourishment in a relatively foreign environment. In a manner of speaking, tumors do much the same, they grow aggressively in a relatively foreign environment,” says Ali Salanti from the Department of Immunology and Microbiology at the University of Copenhagen.

“We examined the carbohydrate’s function. In the placenta, it helps ensure fast growth. Our experiments showed that it was the same in cancer tumors. We combined the malaria parasite with cancer cells and the parasite reacted to the cancer cells as if they were a placenta and attached itself,” Ali Salanti explains.

They tested thousands of samples and various forms of cancers, from brain tumors to leukemia, and found that the malaria protein was able to attack more than 90% of all types of tumors.

“It appears that the malaria protein attaches itself to the tumor without any significant attachment to other tissue. And the mice that were given doses of protein and toxin showed far higher survival rates than the untreated mice. We have seen that three doses can arrest growth in a tumor and even make it shrink,” PhD student Thomas Mandel Clausen elaborates.

They are hoping to start clinical human trials within four years. “The earliest possible test scenario is in four years time. The biggest questions are whether it’ll work in the human body, and if the human body can tolerate the doses needed without developing side effects. But we’re optimistic because the protein appears to only attach itself to a carbohydrate that is only found in the placenta and in cancer tumors in humans,” Ali Salanti concludes.