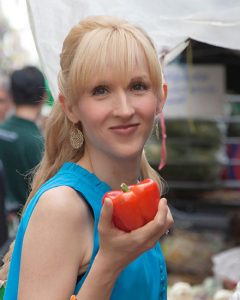 Jennifer M.S. Robertson is known online as The Raw Expat™ and is the author of Ice Cream That Everyone Can Scream For, a raw vegan recipe book catering to lovers of frozen, sweet treats.

She's an American expatriate wife and mother, a trained raw foods chef and educator, Placenta Encapsulation Specialist, and holds both Master's and Ph.D. degrees in fisheries science, currently serving as an Honorary Researcher at the University of Aberdeen, Scotland.

Jennifer's academic literature has been published in numerous peer-reviewed journals, and her health and wellness articles and recipes have been featured on prominent websites and in print, including The Huffington Post, The Hindustan Times, and Bangkok Airways Fah Thai magazine.

Jennifer first became interested in traditional and natural postpartum treatments after the birth of her son, when she encapsulated her own placenta with the aim of balancing her postpartum hormone levels. This led her to complete PBi’s Placenta Encapsulation Specialist course and start a successful practice in Bangkok, Thailand. She quickly became motivated to learn more about traditional methods of caring for the new mother, particularly to use in an expatriate environment, where most mothers have no family help after giving birth. Jennifer is in her eighth year of safely encapsulating placentas, and a holds a certification in Traditional Moroccan Postpartum Medicine.

Having lived as a resident expatriate in Scotland, India, Thailand, the U.A.E., Saudi Arabia and currently immigrating to the Republic of Cyprus, Jennifer's mission is to educate women, particularly expat mothers, on how to create and sustain a healthy lifestyle no matter where in the world they find themselves, with a passionate focus on conscious living and natural healing using plant-based food and remedies.