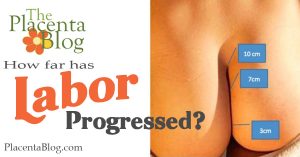 Vaginal checks during labor, used to determine cervical dilation and the progression of labor, is one of the most dreaded and uncomfortable procedures for a laboring woman.  Vaginal exams can also increase the risk of infection as bacteria is forced toward the cervix, especially after the membranes have ruptured.  For low risk labors, vaginal exams can even be unnecessary.

Interestingly, there is a less intrusive, visual way to assess a moms labor progression:

Byrne DL & Edmonds DK, the authors of the original study, surmise that the cause of the line is ‘vasocongestion at the base of the sacrum.’ Furthermore, the authors reason that ‘this congestion possibly occurs because of increasing intrapelvic pressure as the fetal head descends, which would account for the correlation between station of the fetal head and red line length.'”  -Science & Sensibility