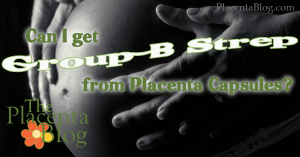 Group B Strep Transmitted via Placenta Capsules
There is an alarming article on a case study which has just been released by the CDC, cautioning the ingestion of placenta. The situation arose out of Oregon state whereby a baby was diagnosed with Group B Streptococcus agalactiae (GBS), after successfully completing treatment for it and being sent home.

After bringing the baby back into the hospital for irritability, GBS was once again found to be present in the baby. The bacteria was eventually found to be in the mother’s placenta capsules.

Apparently, the mother had hired someone to pick up her placenta from the hospital after the birth, encapsulate it, and return the capsules to her 3 days later.

Preparation Methods Matter
The encapsulator, who is not named in the report, prepared the placenta from raw, and dehydrated it at temperatures ranging from 115°F–160°F (46°C–71°C). Per the article, heating at 130°F (54°C) for 121 minutes is required to reduce bacteria present in the placental tissue. That did not happen in this case.

Methods of GBS Transmission
There are many ways that GBS can be transmitted to the baby. Since the mother’s milk was found to be clear of GBS, we know it did not get transmitted via breastfeeding. So how did the baby become contaminated again? The answer is, we don’t know.

While GBS was present in the placenta capsules (and absolutely should not have been), it does not necessarily mean the baby became re-infected by the capsules. GBS can be transmitted by someone not washing their hands before touching the baby. From the CDC’s own website on GBS: “For a baby whose mother does not test positive for group B strep bacteria, the source of infection for late-onset disease can be hard to figure out and is often unknown.”

Placenta Encapsulation Standards
I created PBi’s placenta encapsulation standards based on Traditional Chinese Medicine – but also based on food safety protocols and safe food handling. Preparing a placenta raw has NEVER been advocated or promoted by myself personally or via PBi, for just these reasons. The PBi method of encapsulation, which has been scientifically studied, calls for steaming of the placenta prior to dehydration. When prepared properly, any bacteria, including GBS, is destroyed before ever dehydrating the placenta. Additionally, PBi’s handling of placenta capsules includes refrigeration for the first two weeks after preparation, and freezing for long-term storage.

These have been the protocols and standards in place since 2006. These are the standards and protocols that are on file with the FDA, have been sent to various hospitals, and are what allow me to keep operating personally as a Placenta Encapsulation Specialist® under the Southern Nevada Health District guidelines and standards.

Safety First
Raw preparation is not safe. Even if a mother does not test positive for GBS, other bacteria lives and grows on the placental tissue. Dehydrating from raw, especially at low temperatures, allows that bacteria to grow, and even become more resistant to destruction.

Mothers, please decline raw preparation and request your placenta be prepared according to Traditional Chinese Medicine and be steamed prior to dehydration. I want you to be safe, first and foremost. If your Placenta Encapsulation Specialist® is PBi-trained or PBi-Certified, all of our Specialists are taught extensive safety protocols, and WHY the preparation of raw placenta is NOT advised or advocated by PBi.

With proper preparation, placenta encapsulation is no more dangerous than eating beef jerky. Please follow all food safety guidelines. Additionally, Traditional Chinese Medicine has been using dried placenta medicinally for centuries, and has always required cooking prior to dehydrating; let’s not stray far from the source when utilizing this ancient remedy.