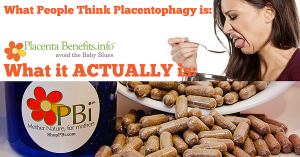 By now you’ve seen the announcement – something like “New research shows no benefits to eating placenta”. The Today Show posted the press release, and even the IFL Science Facebook page got in on the placenta bashing fun. NPR interviewed Dr. Daniel Benyshek and myself to get our perspectives on it at least.

But the main gist of the posts? “Ewwww, people eat placenta!? Gross!” That line is getting old and tired, folks. Let’s come up with something new after all these years, shall we? I’ve been handling that perspective since 2006 and would love to debate on something real.

So there’s new research being published that shows there’s no benefits to placentophagy! Oh, really? It shows that, does it?

The study is being released by Northwestern University – a private medical research school outside Chicago. So that should give you one clue as to their bias and desire to bash a natural remedy that just might be beneficial to women.

Additionally, this is NOT “new research” that they’re publishing. It is merely a review article – they looked at the research that has already been done and they conclude, correctly, that there isn’t enough research to show that it’s beneficial. Ok, I concede that point and completely agree. Since they have nothing of substance to contribute, they decided to throw a huge PR campaign behind it to get it some press – and the media jumped on it because the “ewww factor” gets everyone in on the click party.

The Northwestern University review paper (let’s stop calling it a research paper) simply shares what we already know – that there is no research showing that placenta capsules offer anything more than a placebo effect. That’s not news. That’s the same argument. They looked at a few additional papers (including mine, the survey we published in 2013 on mothers’ experiences with placentophagy). They were quick to point out my potential conflict of interest in their paper (which we carefully controlled for and reported in that paper), so I am going to go ahead and point out theirs.

The first issue: The author(s) alluded to a survey research study they are currently conducting, interviewing health care providers on their views of placentophagy. They even slipped their preliminary data into the last paragraph of their review paper, which typically isn’t done for peer-reviewed journals. So I’m a little surprised it even passed peer review… but it’s pretty clear they are releasing this one to gain promotion for their upcoming paper.

The second issue: The author(s) are not going to support placentophagy because it’s a natural remedy that nobody can make money from. Prescription medication is a big money business, and depression is a huge percentage of that. Some even say half a trillion dollars are spent annually on depression medication, and patients can spend up to $1000 every month treating their symptoms. Why promote something that could help – for free?

Another clue as to where they’re going with this, is that the NPR writer asked me to respond specifically to a comment a psychiatrist had made to her during her interview. The concern was that a woman would choose placenta capsules over a prescription medication that she actually needed to treat postpartum depression. My response is that we promote placentophagy for the first few weeks postpartum – long before a woman could even be diagnosed with postpartum depression. The medical doctors won’t diagnose a woman until she’s been suffering with PPD symptoms for 6-8 weeks. So I will continue to promote placenta capsules the way I always have – it’s the fastest, easiest and safest way for a woman to have best postpartum recovery possible, and could help women avoid the baby blues. I have never touted it as a treatment for postpartum depression.

In Summary
I’d like everyone to reserve judgement for now. We ARE conducting research on placentophagy – our double-blind, controlled placenta versus placebo study is in the data analysis phase right now. The raw data we have collected over the past 18 months is massive, and we are hoping to start seeing some trends from the initial analyses very soon. And since I know someone is going to holler “conflict of interest!”, I’ll just let you know right up front – I prepared the placentas for the participants using the PBi method of placenta encapsulation that I developed in 2005. Sharon Young and Dr. Benyshek are keeping me completely isolated from the data. I have not seen the raw data, and I have no part in the data analysis phase. I will be as interested to see the results as everyone else.

In the meantime, if you’re interested in what sort of benefits women typically experience from placentophagy, go on over to the main PBi page and check it out.