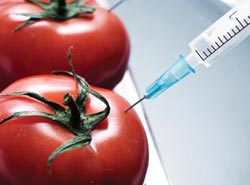 Have you noticed any talk in the media lately, regarding genetically modified (GM) foods? By definition, GM foods have had genes from other plants or animals inserted into their genetic codes. By modifying a plant or animal’s genetics, scientists can make plants more resistant to drought, grow faster, and they are able to take on more desired traits. Foods that are genetically engineered have a longer shelf life and also require fewer pesticides. As a result, farmers’ costs go down while revenue increases.

While all the benefits of GM foods may sound great, what are the implications for our health? Corn, one of the largest genetically modified crops, contains the toxin, Bt, to deter pests. This corn is used to feed the livestock from which we receive our meats, eggs, and milk. According to the GM industry, when people consume animals fed by GM feed, the human gut destroys any toxins and passes it as waste, thus making GM foods safe.

However, in a recent study, the toxin found in GM foods was also found in the blood of 93% of pregnant women and 80% of umbilical cords. This latest finding refutes the GM industry’s claims of safety. It appears that these toxins are not only staying in the body, but they are passing through the placenta to the fetus. The implications of exposure to the toxins, if any, are still not clear.

Robin Lim, a midwife in Indonesia, where a large portion of the diet is GM soy, has reported seeing many issues relating to the placenta in her practice. This high concentration of GM foods in Indonesia is the result of their national government’s promotion of the practice. Among seeing an increase in retained placenta, where the body doesn’t deliver the placenta naturally, she is also noticing increased incidence of velamentous umbilical cord insertion and short cords. Less than normal quantities of Wharton Jelly are also being observed. As you might imagine, these rare abnormalities are causing more fetal deaths in her community.

It is still unclear whether the link between the heavy GM soy diet and these placenta abnormalities is a coincidence or if they are, in fact, a result of the GM foods. Further study is required to better understand the impact of GM foods on our bodies.

Read more about genetically modified foods by visiting the World Health Organization (WHO).